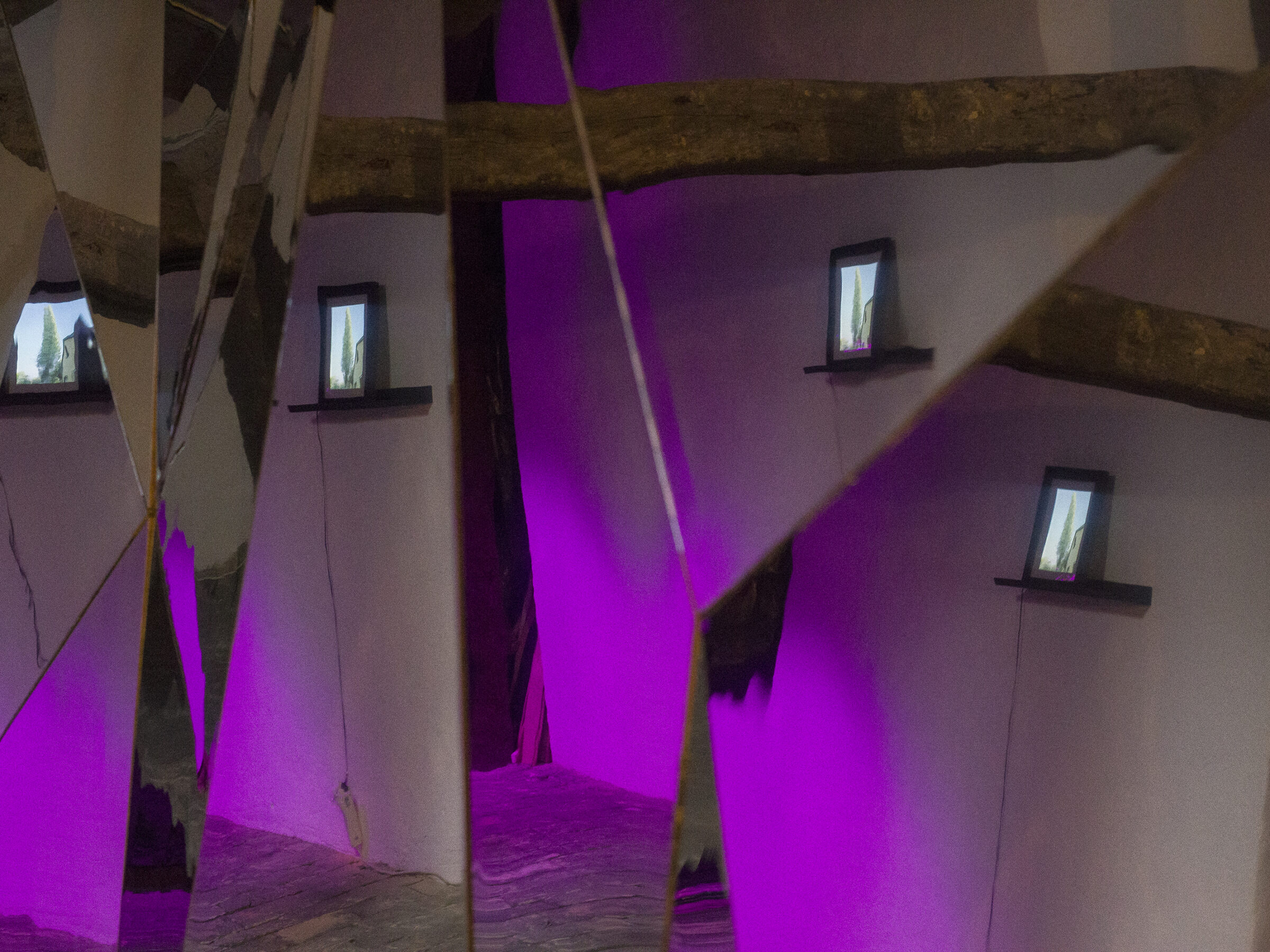 Between the Four Walls

Between the Four Walls was my DLA masterpiece show, which I presented in spring 2022. The covid made me slip in time, I should have realized this show long ago, but then I could not ignore the events that were taking place in the meantime: the increasingly polarized domestic political climate during the epidemic, the outbreak of the Ukrainian-Russian war, I could not pass by without excluding them from my mind and thus from the exhibition. The exhibition was completed by the end of March 2022, can be seen as a condensation of my anxiety about my powerlessness to cope with the lies of parallel realities and social narratives produced by authorities and other power structures, which hide the real danger and problem of our present to keep their position.

One of the most important issues I am recently looking at is the individual responsibility and the possible effects of our actions at our social life, with a special focus of the learned helplessness. I believe that we tend to pretend that events are the result of causal factors outside our control as civilians: we are only a grain of sand in a desert. But we must have had learnt by history for now that if we leaned back at our couch, the power always found the way for oppression. In my head, my Jewish great-grandmother’s thoughts echo from the 1930s and 1940s: “I just want to live happily” (from the time of the first Jewish laws) or “No system lasts forever” (from 1947, around the time that the communist regime was consolidating in Hungary, and it took more than 40 more years…). Neither of these sentences offered her any long-lasting comfort or relief, any escape. What is the point at which the individual can no longer separate his private life from the events of public life and the phenomena of his environment? At what point does social regulation turn into over-regulation, into the violent and all-encompassing domination of individuals’ actions, thinking and identity, into the discrimination and marginalisation of people who do not fit in, into the mass sorting out of useful and useless individuals? And most importantly from what point feel the different individuals that there is a direct danger in their life? Because in my view, people only show solidarity and try to do something for/against a cause if they feel affected by the problem directly. But when someone feels affected by a story or situation is different for each individual. In many cases, the source and exact location of the problem cannot be clearly identified, as it is not happening directly with us or with those who belong to us, but a little further away – yet.

The setting for the masterpiece was the attic of my apartment in Kőbánya, Budapest, which is also my studio: a relatively dark, closed space, a physical extension of my thoughts and feelings, my mind, which forms a boundary between the outside world and my inner world. My private space. For the duration of this show (25 March – 4 May 2022), I gave a series of guided tours, taking the people I invited on a tour from the garden’s gate to the attic. During the small group discussions, I raised the questions outlined above through the presentation of the works, always following a similar chronology as I guided the visitors through the environment I had constructed. 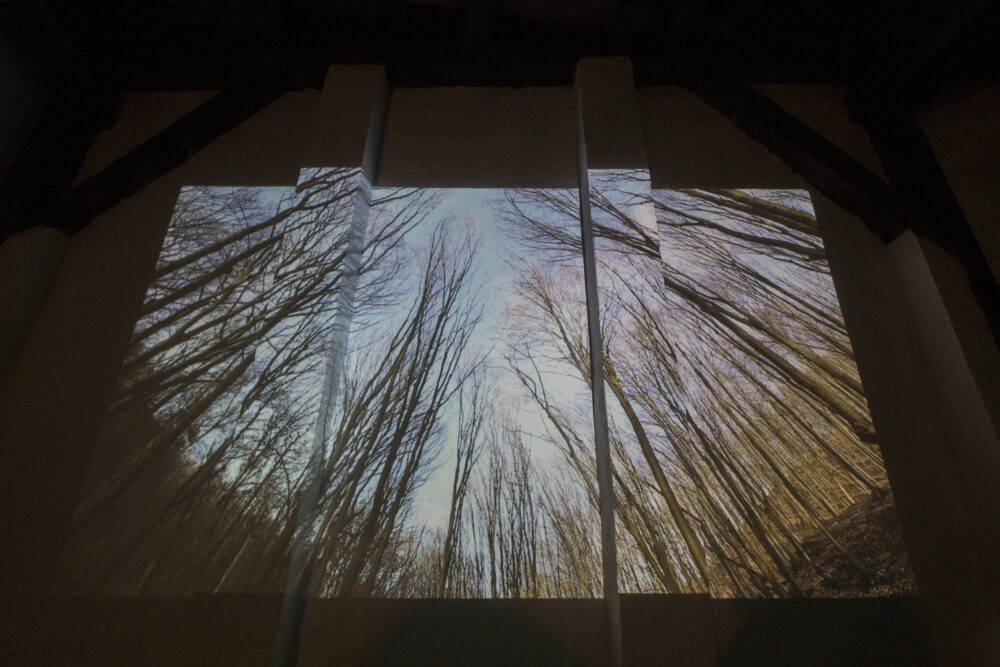 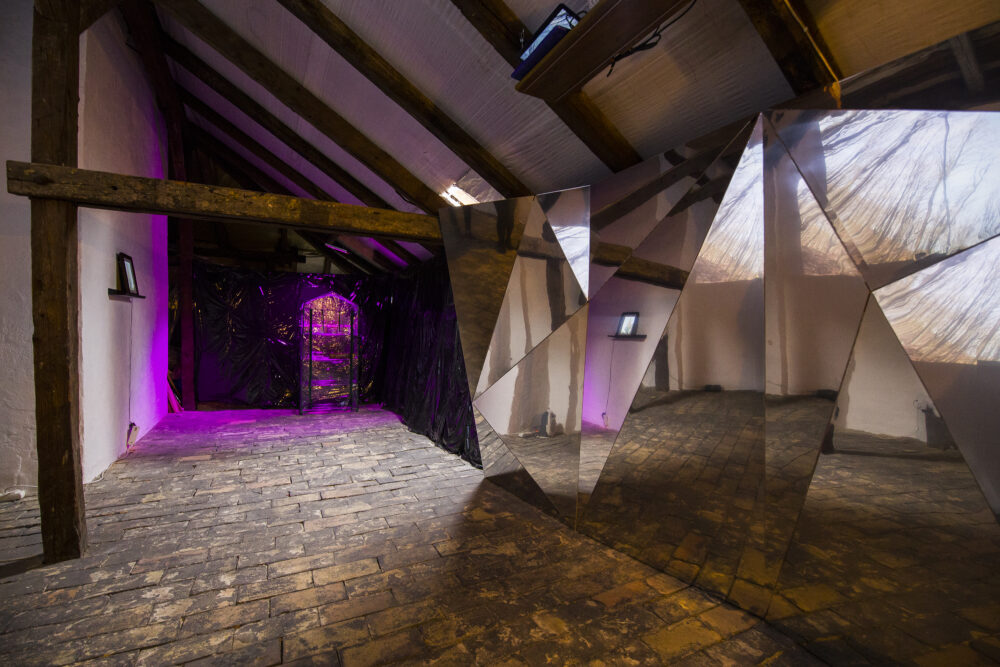 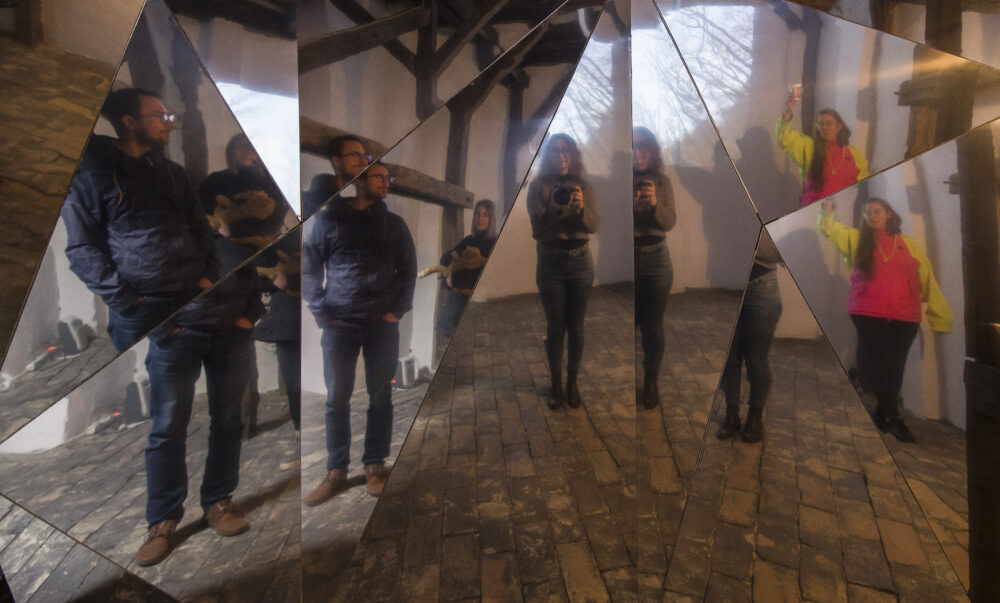 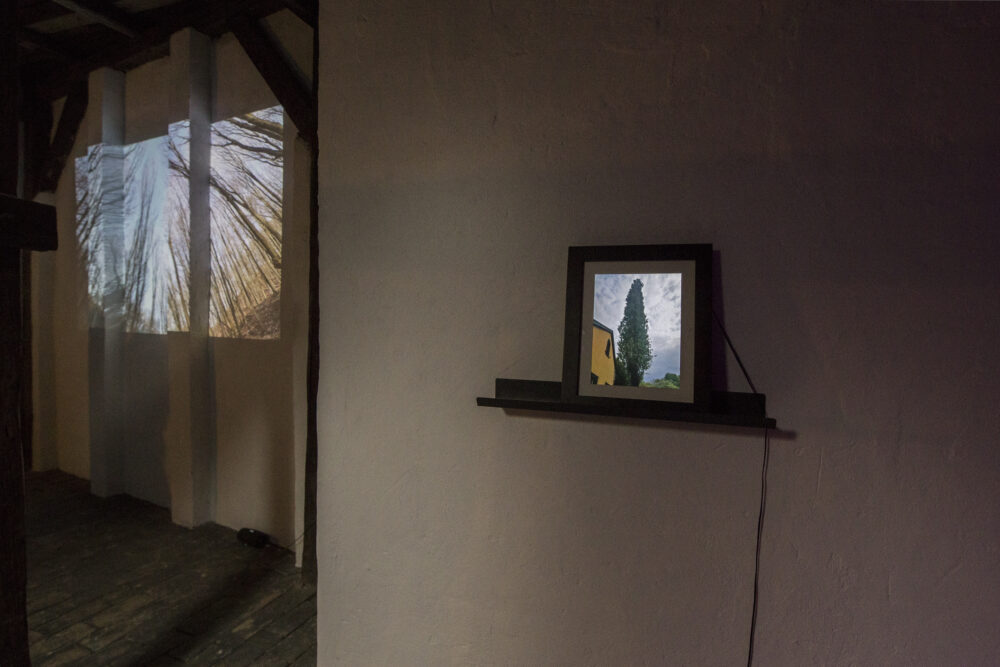 Upon entering the loft space, the viewer was first confronted with a projected image of a forest, smaller than the life-size scale. Windswept canopy can be seen and heard of an early spring forest, accompanied by the chirping of birds, but after a point a radical and oppressive sound of human presence creep in: a chainsaw starts working. The exact source of the noise is unidentifiable and it doesn’t affect the trees nearby. You are safe although perhaps a whole forest is being cut down around you. For now, the trees (things, phenomena, people) are not being cut down right next to us, but the sound is very close. When will it get here? When will I feel that the problem is already here, that it is already happening to me?

In front of the projection I have placed a polygonal, fragmented, mirror wall, on whose multiply fractured surface the tormented forest and ourselves as viewers are reflected. We are simultaneously composed in a shattered, virtual image. The source of the conflict surrounds us in fragmented form. What concerns me most lately is: if I recognise that the problem threatening my environment also affects me, because I am part of that environment, what options for action do I have? How much is organic detergent worth on the pollution scale, marching or organising in demonstrations for university independence, an artistic public action or a painting on the wall of a white-cube? Do I have any effective means in my hands, as a human being, as an artist, to defend what is important to me?

Continuing the tour in the space, there is an animation about a lonely tree in a digital screen: for a year in 2020, I was taking photos of the poplar tree in my garden, at intervals, as it dressed and shed its canopy. It photosynthesizes, it exists. It just does what the law of nature tells it to do. All the things I worry about now as a little grain of dust will go away someday? Will it go away even if I do nothing? Can I turn my back on my frustrating torment without a care in the world, or can I lock myself in my ivory tower (my attic) and just wait till it’s over?

Sadly, blissful ignorance and liberated nonchalance seems to me at this point a luxury I cannot afford. I wanted to offer an option for action, or even behaviour, which is the one I like the most at the moment: I wanted to highlight the importance of small, local actions. To close the exhibition, I placed a foil trough under a UV lamp, where I grew seedlings that I had previously sown from seed, all annual crops: tomatoes, peppers, herbs and spices. These little plants, grown under artificial conditions (within the walls of a studio), were free for anyone to take home.

My aim was to ask questions together, during small talks, about learned inertia and the broadening of individual horizons of action, outside the formal art establishment, in the space of one’s own life, and to say that there is always something that can be done.

Pictures about the plants sent by the visitors till now: 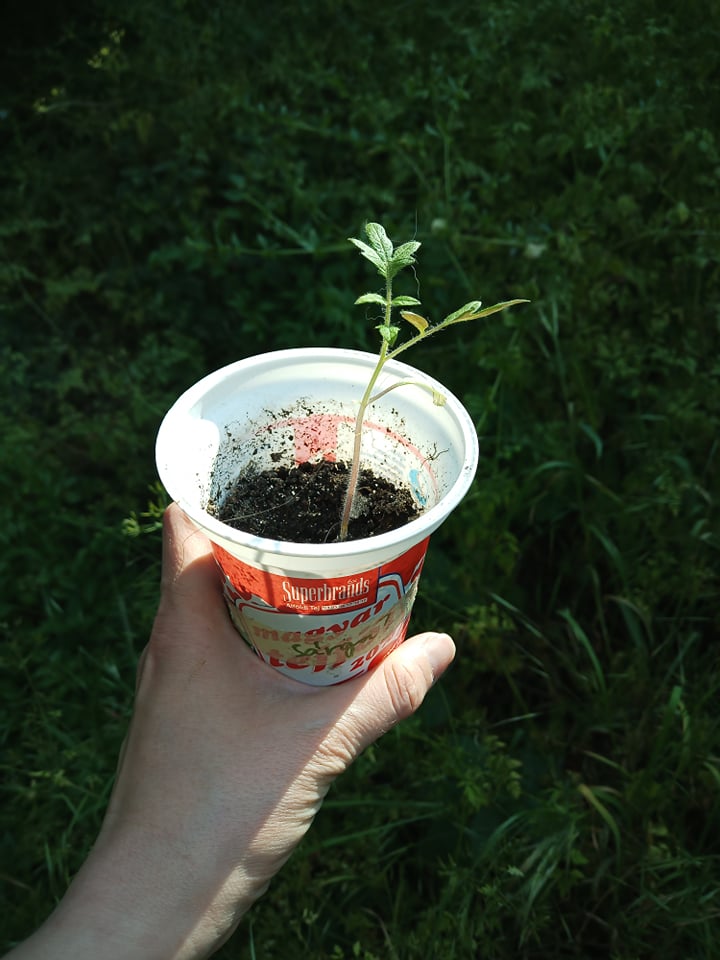 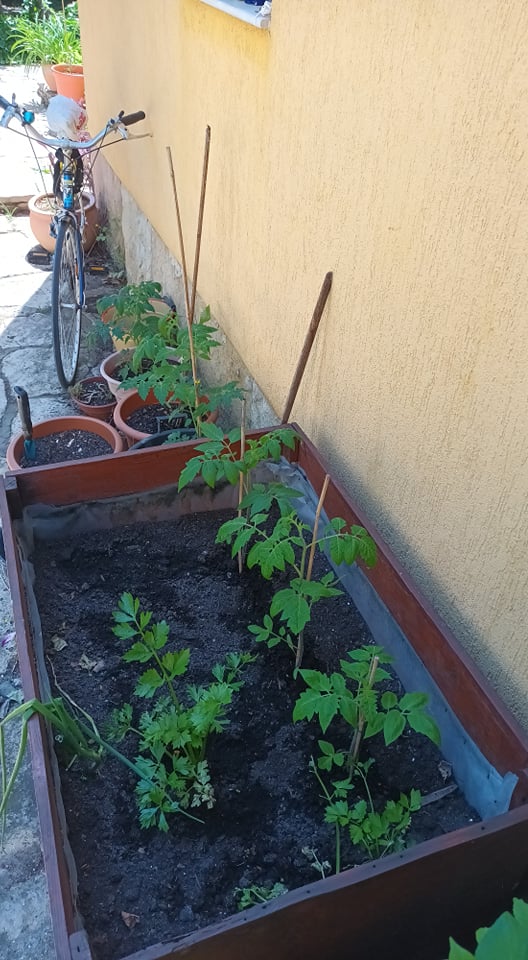 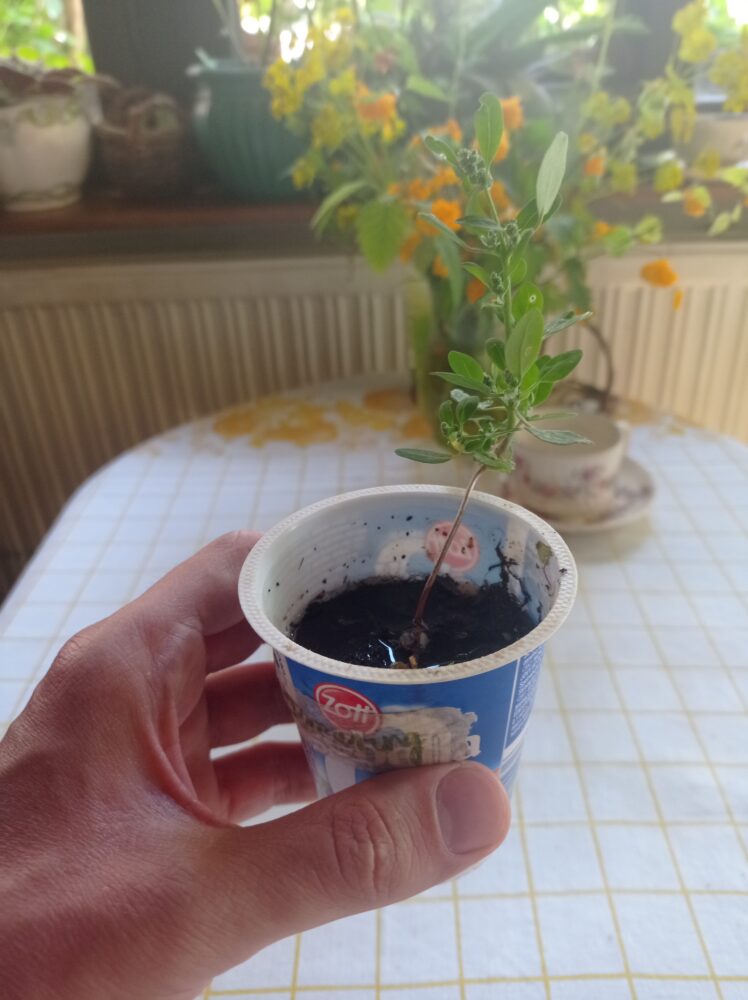 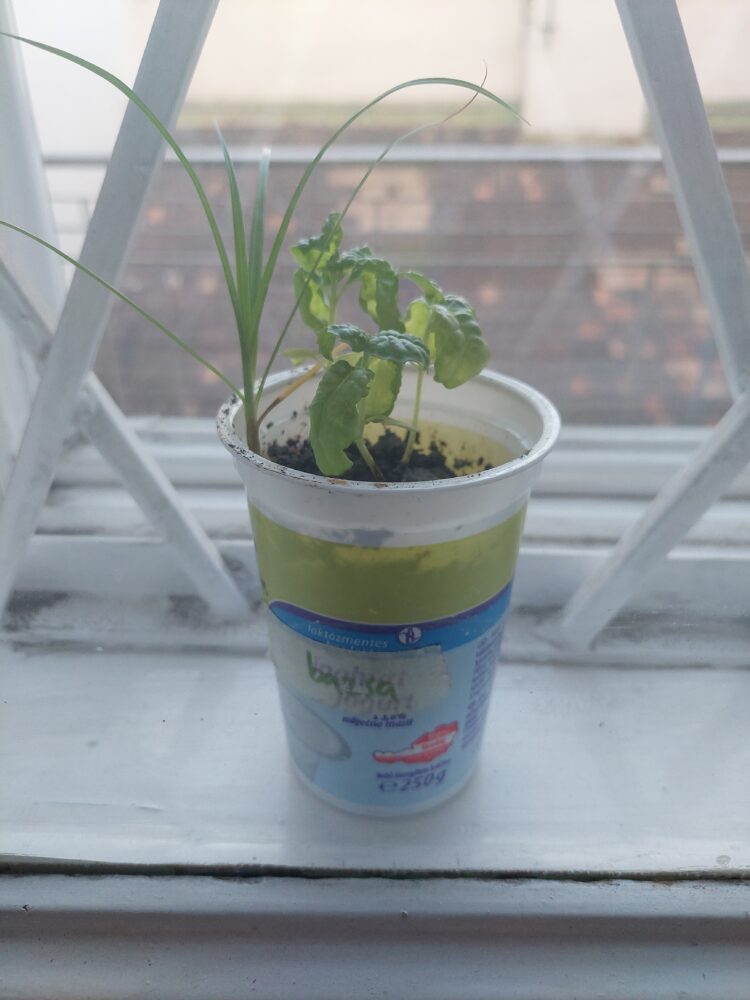 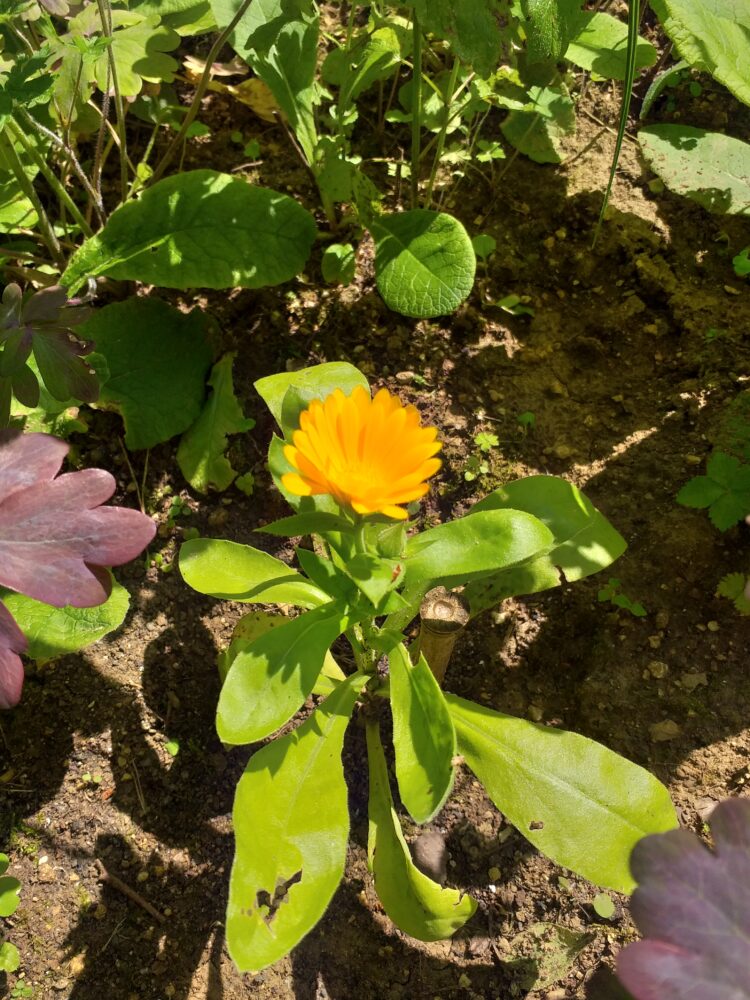 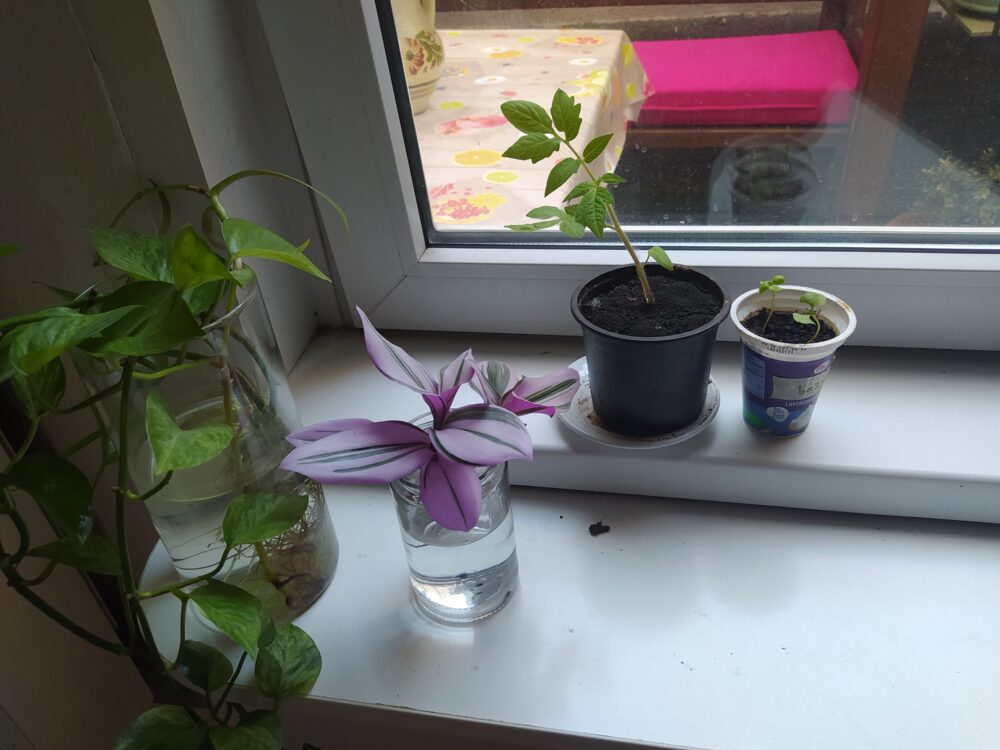