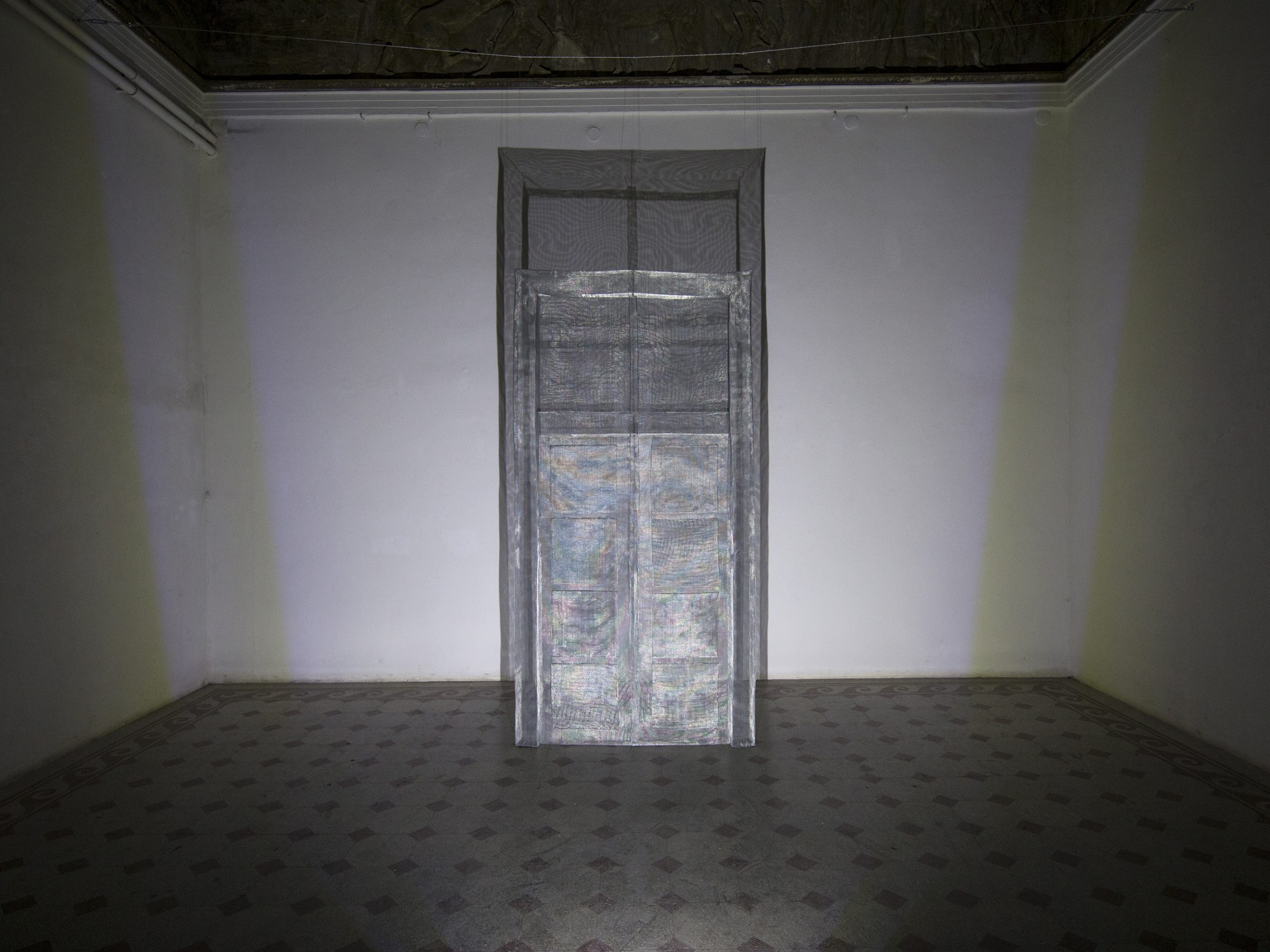 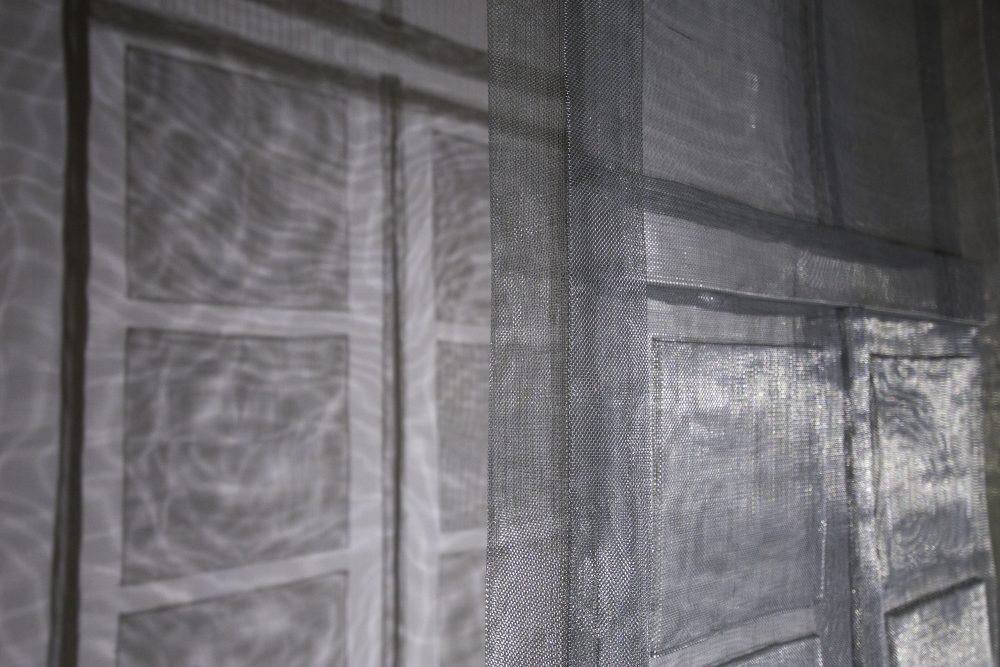 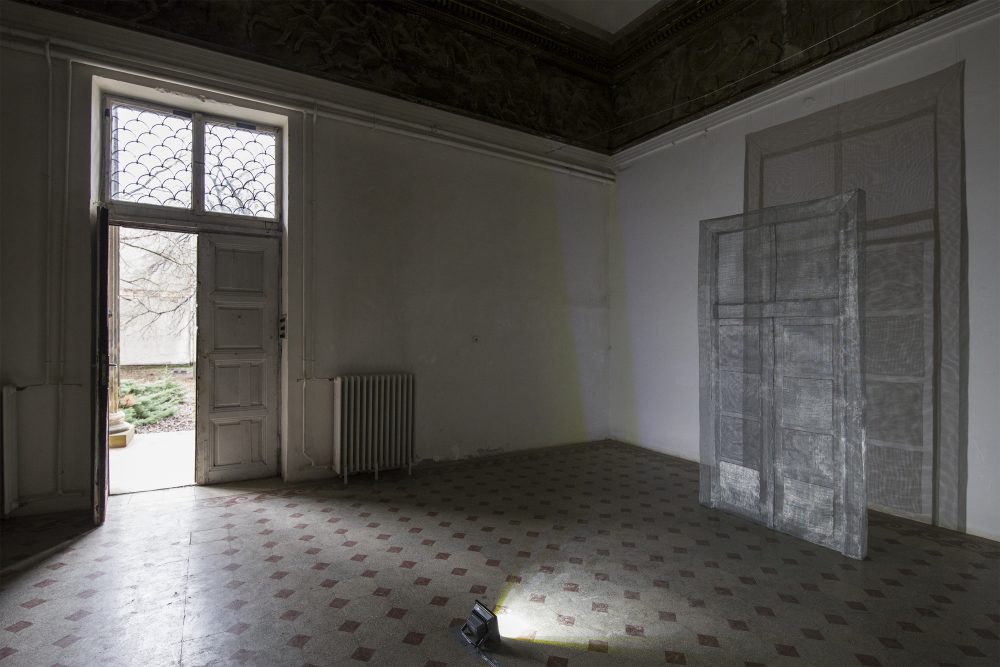 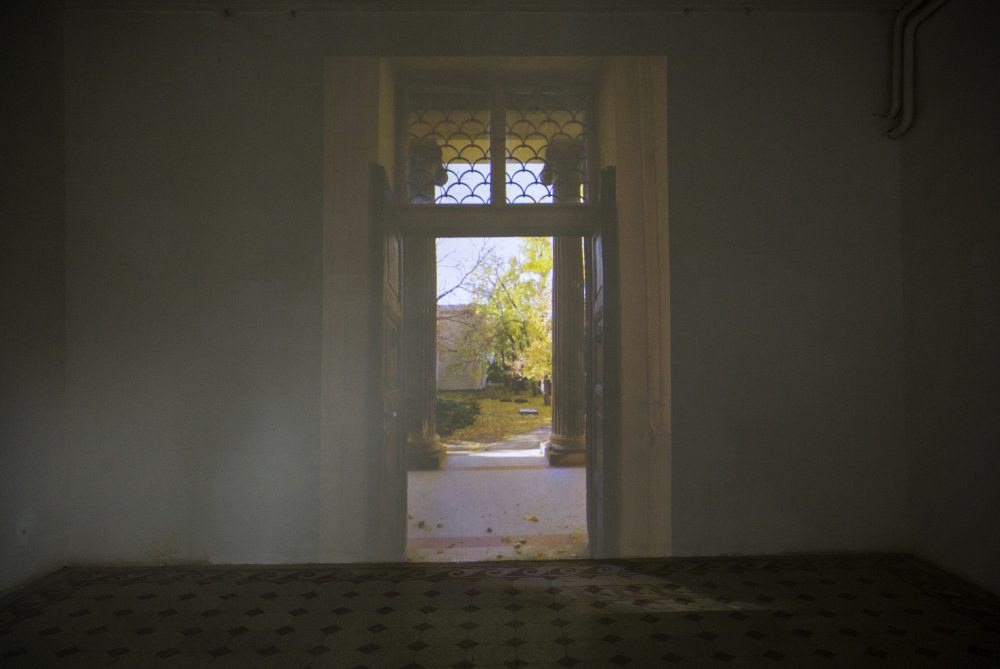 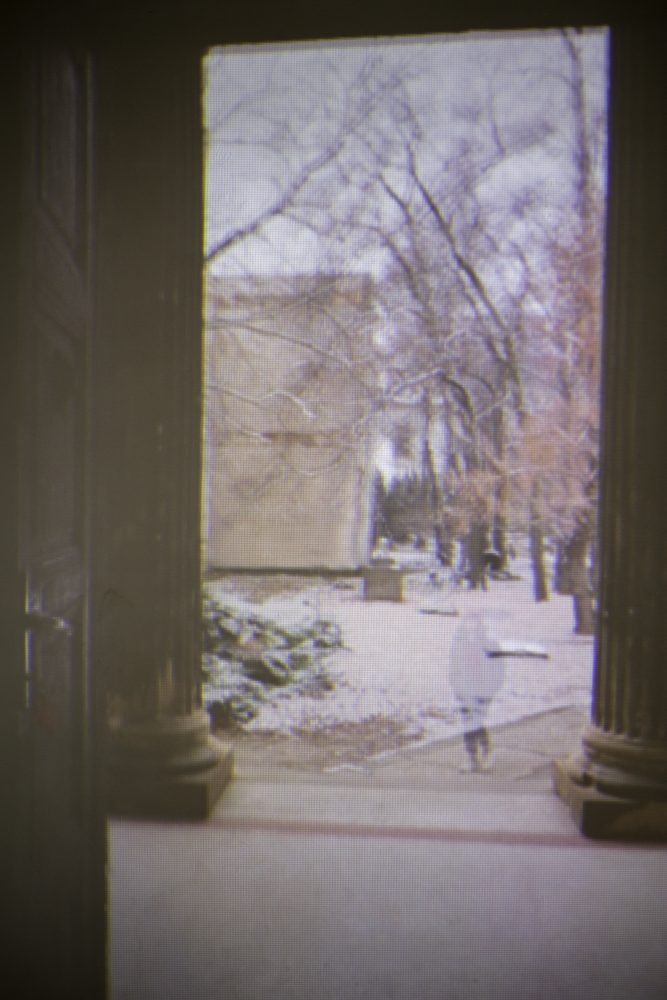 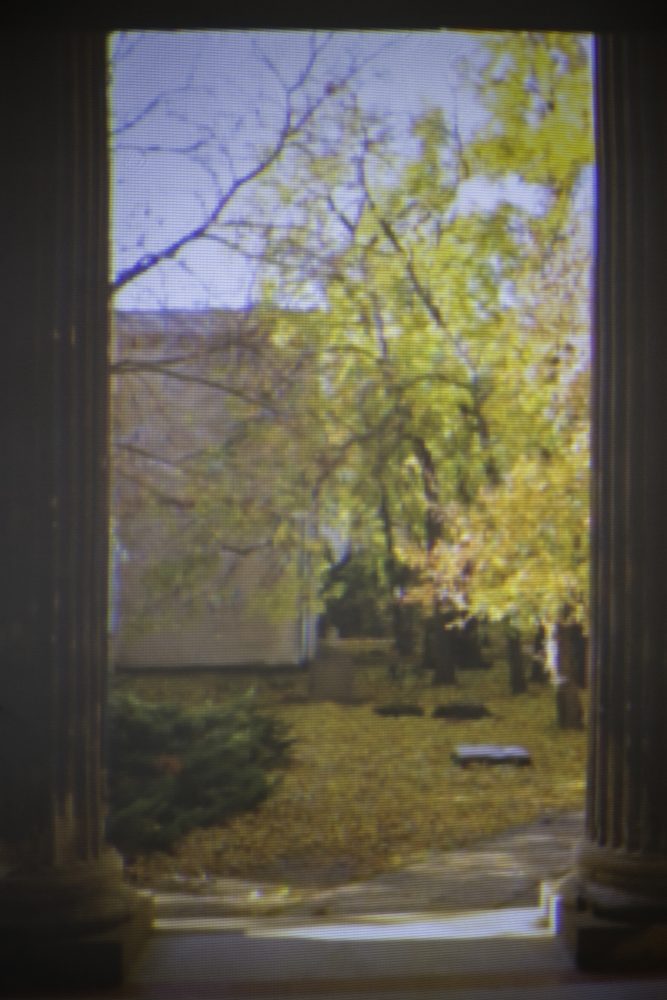 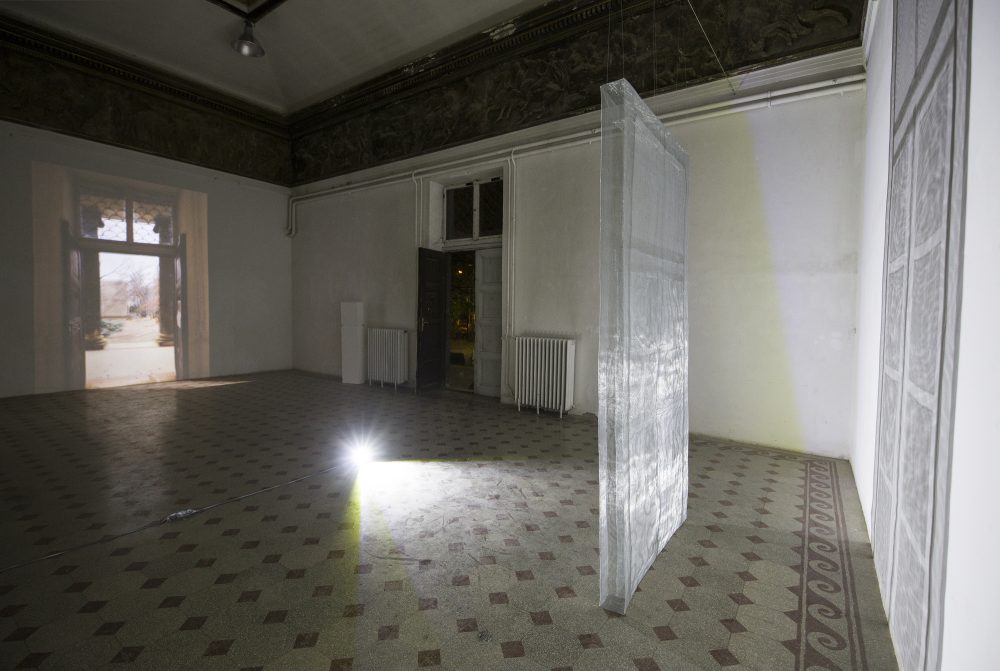 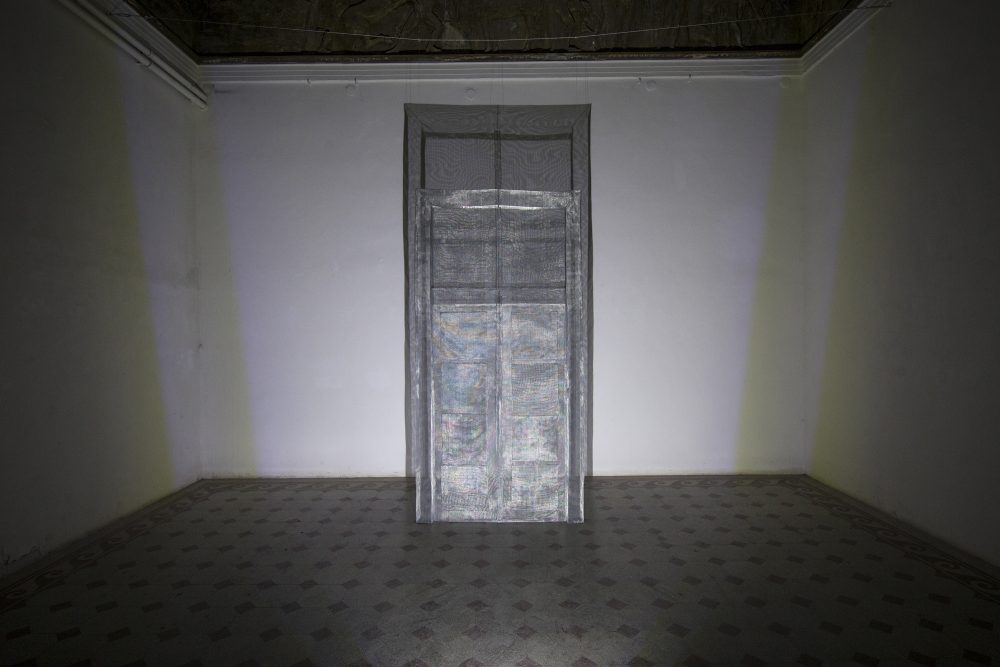 My solo show titled ‘Three Doors’ opened in February, 2018 at the Parthenon Friese Hall, Budapest. I exhibited a site-specific installation: a video projection (with more layers on each other) and a metal fabric installation which are both the original entrance’s copies. This environment is a try for leading the vier’s gaze into his surrounding space and time – the subjective and different perception of the current and the virtual (potential) dimensions.

For the video projection I was recording videos in a fixed point of the Parthenon Friese Hall for half a year, behind the entrance door looking outside with my camera (on a stand), from the Summer of 2017 till the Winter of 2018. Then I cut the recordings into a multi-layered video: sometimes I use more transparent layer on each other with the illusion of simultaneously existence, then it change into single layer; sometimes I use normal speed (real time) sometimes faster/slower tempo. I tryed to illustrate the subjective way how the different individuals percieve the time and how we remember it in its non-linearity, non-egality and subjectivity. I projected it onto the gallery’s wall in life-size in loop.

The other door which I created is a metal fabric installation, sewed by me. It also illustrated (copied) the entrance door, but the sculpture is the 70% reduced size of the original one, the direct light gave a shadow which was the life-size copy of the original door. This hanged door by the metal fabric with its shadow gave the feeling if it’d be a semi-existing object in the real space, it’s hard to define its borders and ends.

In this point the time and space are merging and expanding into an uncertainty mass, giving the opposite pole of the human wish to measure the time by clock and the space by satelites – to get an objective picture about our dimensions and existence. Trying to square the circle.